Some of you may have missed this but, ​just before Christmas, Robin Vincent of Surface Pro Audio and Molten Music Technology, published a full review of Yeco over on his Youtube channel. It is embedded at the end of this article and it's well worth a watch. It is the most comprehensive review of Yeco to date and goes into very precise detail about almost every feature. We'd like to thank him firstly for taking the time to put Yeco through its paces and secondly for his very kind words and compliments. The accompanying article over on his site can be found here for those who wish to read it (and we do encourage you to) http://surfaceproaudio.com/yeco-touch-control-ableton-live-full-review/ Both the video and the written review do an excellent job of explaining exactly what Yeco does and what we intended it to be good at and used for. Robin makes this distinction nicely  At the time, we did not have the browser feature released which was a pity I guess as it was one of things Robin said he would have liked to see. There were plenty of other suggestions in there that we are looking at or were already looking into such as MPE support, which I can tell you is on it's way. Overall though we couldn't have been happier with the review and we of course urge any of you reading this to check it out and try Yeco for yourself.

Replacing the Demo with a Free Trial

So, the current demo is basically a cut back version of Yeco with limited abilities, mainly a limited number of tracks and limited access to the touch MIDI controllers. It allows people to see if Yeco runs on their computer and gives a flavour of what it's like to use. It is unlimited and free. The problem is that is does not give people the opportunity to experience all the features of Yeco before they buy it. The 14 day free trial however, is different in that you can try Yeco with all its features but for a limited time only. We think this is enough time to figure out whether you wish to purchase or not. The reason for changing from a free demo to a free trial is pretty simple. It's what people are asking for. Those who have the free demo will still be able to use it but we are ending support and updates for it. We are emailing everyone who downloaded the demo to let them know and move them to the free trial if they so wish. Also note that when signing up for the free trial we do not ask for any payment or credit card information whatsoever. Download the free trial here​

Today we are releasing our most requested feature to date, access and control of Live’s browser. This allows you to preview and load instruments, effects, packs and plugins right there in Yeco, without having to go back to Live. We promise this will save time and improve the smoothness of your workflow The browser update is free to existing users so if you are one, check your inbox. We have also made several improvements in speed and reliability across the application. Thanks to everyone who provided us with feedback for this one. Take a look at the video below to see it in action.

Added chords featureThis feature allows you to assign chords to keys on any of our controllers. Watch the short 1 minute tutorial below to see how it works. Auto starts MIDI with last settings on launchThis was much requested by users. This feature means that Yeco now remembers the last virtual MIDI port that was chosen and connects to it automatically the next time you launch Yeco.  Remembers screen ratio selection on launchSimilarly Yeco now remembers the screen ratio last chosen and loads it automatically on launch Choose direction of velocity on padsAs our pads were velocity sensitive increasing along the y-axis from bottom to top. Following user feedback, we have now included a control to change the direction of the sensitivity to go in the other direction. Of course you can also disable this at any time and set the desired velocity for the entire pad. ​Improved update checkingYeco now informs you if there is an update available right from the home screen on launch. Of course you will still get an email notification from us too. Bug fixesMany thanks to all those who took the time to report issues. Below is a list of fixes for this update.Fixed labels on double hexFixed issue with scenes and track select when keyboard is openFixed issue where pad names would not update if a midi device was put in front of the drum deviceFixed bug where RtMidi would be re-initialized when the MIDI button was pressedFixed error where clips in frozen tracks would not be shownFixed crash caused by keyboard aftertouch. Installing the UpdateThis update is free to existing users. Click the 'Check Updates' button on the Yeco launch screen to go directly to the update page.We advise you to uninstall the previous version of Yeco before installation of 1.04Once you have installed 1.04, it is necessary to reinstall the remote scripts

Today we are delighted to announce our first major update to Yeco since releasing in May. We have had several small bug fixes along the way but this is very different. In this update we have added two new MIDI controllers; the 8x8 pad grid and a full size, 98-pad Hex controller. This is free to existing customers and is included in all new purchases of Yeco. If you are an existing customer, please check your inbox! Other improvements are as follows:Major improvements to the loading of the clip gridImprovements to the load time and overall responsiveness of YecoAdded playing position timer in the toolbarSliders position is now relative instead of absoluteImproved latency and responsiveness of the drumpad controllerSeveral other improvements to the efficiency and reliability of the live script Small bug fixes Thanks to everyone who submitted bugs and provided us with feedback. We hope you enjoy. Check out the screenshots below and take a peek at our new video to see the new controllers. *Note: If you have Yeco Trial installed we advise you to uninstall it before updating. Installing the update may cause a warning from Windows Defender on some computers. If you get a warning, click 'More Info' or 'Learn More' and then click 'Run Anyway'. ​8x8 Pad Grid 98 pad Hex Controller

This field is required.

You are now signed up to our email newsletter. We will not share your information with any third parties

Intro to the Hex Controller​ 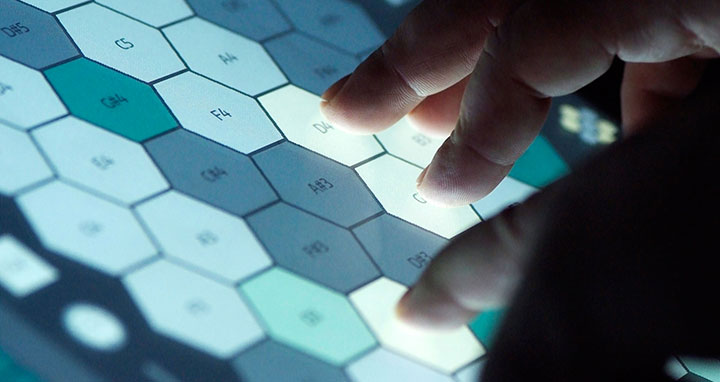 The main feature of this layout is that you can learn one chord or scale pattern and transpose it to any key or octave by simply moving the pattern elsewhere on the grid.

For example, here is the shape of a major triad. No matter where on the grid you make this shape, you will get a major triad with the root note being the lowest. This next diagram explains a little more. 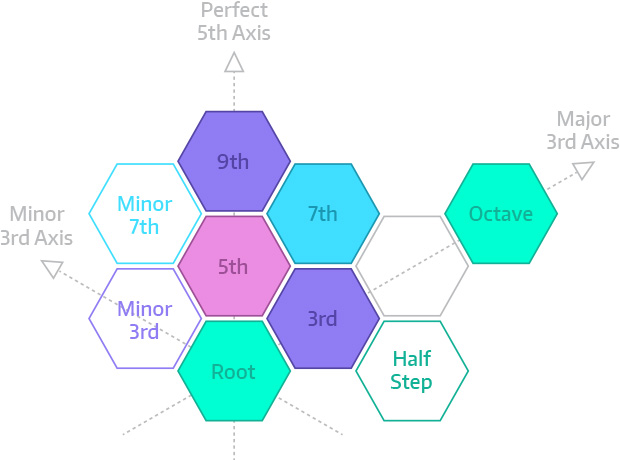 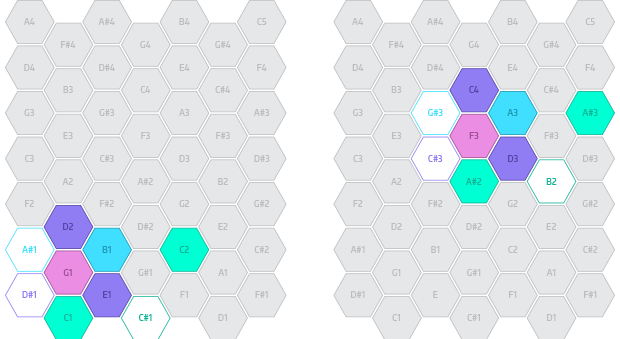 Look through the gallery below for chord shapes or download the PDF here to stick on your wall as you practice. 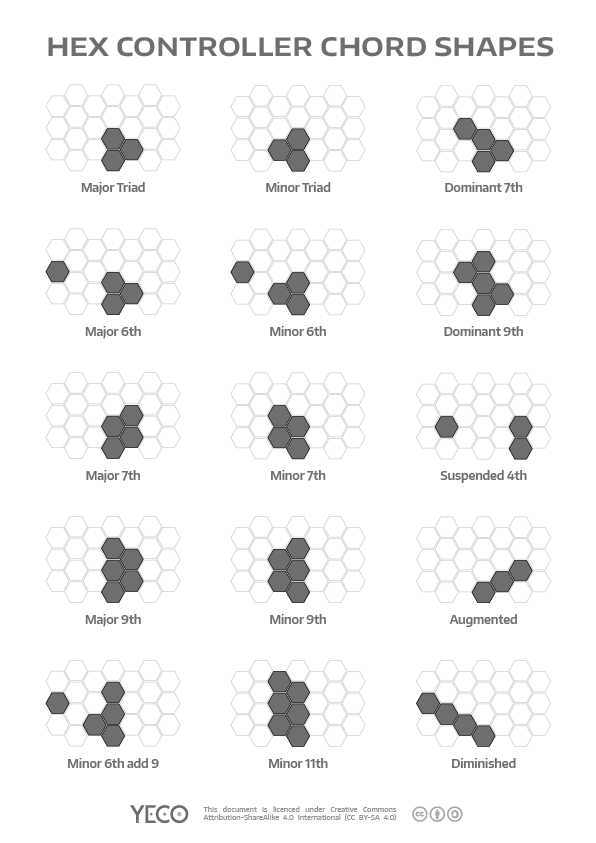